Through the efforts of Mario Zurita et al., seven hundred colleagues based in Mexico, including me, have signed the following petition (translation is mine). The list of signatories can be downloaded here.

“We, the researchers signing this document, denounce the deplorable state of financial (and other) support scientific research receives in the country and the difficulties and shortcomings confronting scientists in Mexico. Our country faces multiple crises linked to corruption, impunity and the lack of equal opportunities. To revert this situation, we need amongst other things a high-quality educational project, supported by basic science and knowledge creation.

Scientific research is the most potent instrument of progress and development humanity has ever encountered. Thanks to research, fundamental laws that govern the universe have been explored and discovered, and multiple diseases have been outstripped, to mention examples. Application of knowledge acquired through basic research has produced benefits we take for granted, such as access to electricity, potable water and sanitation, vaccines, internet and transportation, amongst many others. The best manner in which a country can guarantee its social wellbeing and its economic and technological development is inverting in education and scientific research.

At this moment, the scientific community of our country finds itself in a crisis. This is a result in part because those responsible to obtain and distribute the necessary resources have little interest in scientific research, which they consider superfluous. Thus, in times of economic crisis, authorities find it simple to cut dedicated support to research. Such deliberate politics are not only explained due to the present budget limits, but also because it appears that the ultimate goal of the current national project is to maintain optimal conditions for a tiny elite to become wealthier at the peril of many. When an economic crisis unfolds, it may be necessary to reduce public financing, but it is important to preserve the future. In Mexico, historically there has always been an allocation of less than 1% of the GDP, when the standard in developed countries is a minimum of 2%. This situation is unacceptable as it condemns our country to regression and underdevelopment.

The social cost of the lack of investment in science is enormous: this omission results in the deterioration of scientific infrastructure which becomes obsolete. Likewise, long term research projects are detained or delayed, but also human and monetary investment becomes lost irreversibly; the cut of student fellowships for graduate study, previously evaluated and authorized by CONACyT puts at risk the academic formation and graduation of these students. These measures mean that the training of students depends entirely on resources obtained by their thesis directors, going against the purpose of training human resources at high level and send an infortunate message to future researchers.

Many inefficiencies and irregularities exist in the administration of the resources dedicated to research bringing us in a state of financial incertainty that stalls the progress of investigations and an excess of administrative tasks takes away time and effort from the scientists, who should be doing research and not administration and thus spoiling the advantages of their high-level qualifications and training. Furthermore, the times grant calls open and close are being constantly delayed impeding any planning and continuity of research projects. Finally, we are concerned that the processes of evaluation are inadequate to ensure fair judgments.

For the above reasons we call upon the authorities who are responsible for the advancement of science in Mexico to fulfill their duty towards society, by ensuring that in preparing next year’s budget, the Federal Government awards at least 1% of the GDP to research and guarantees that at least a third part of this award is dedicated to basic science, that it critically evaluates the process of distributing the funds and facilitates the utilization of the resources.”

The petition was published as an advertisment in the national press – el Universal – on the 27th of July 2017. 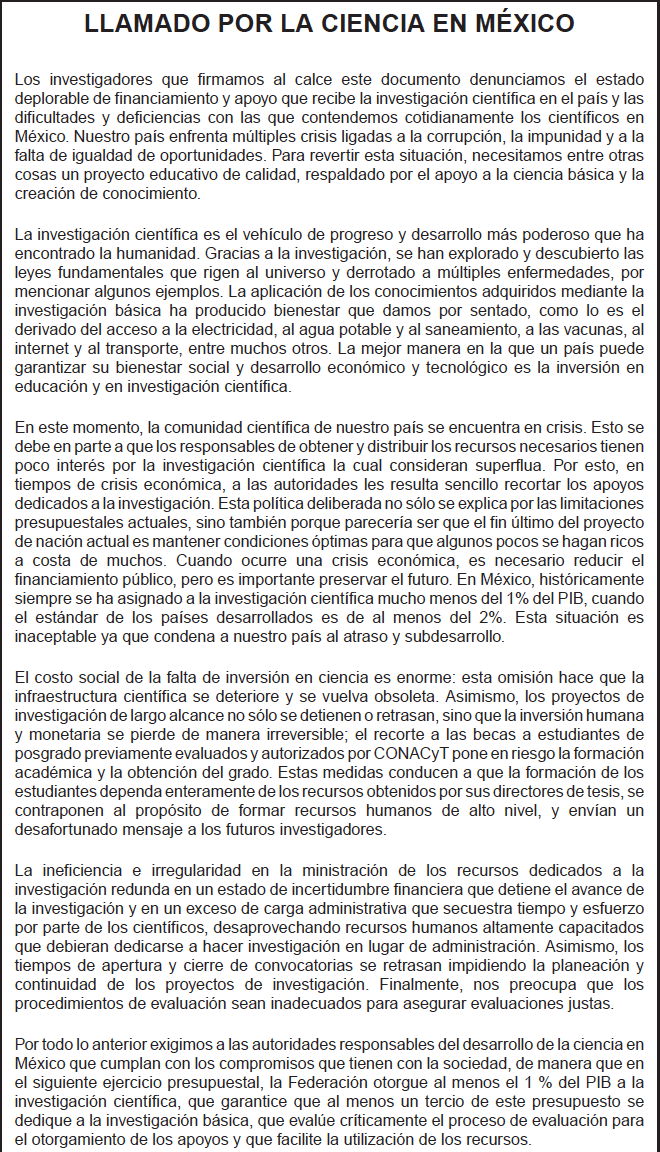 5 thoughts on “A CALL FOR SCIENCE | MEXICO”