A reaction to the mounting criticism of academics has just been published from the managers at King’s College London in the form of commentary below Dorothy Bishop’s article. I write here in response, but please allow me first a brief digression. When Simon Gaskell (Principal of Queen Mary University of London) started breaking that College

(teaching me the meaning of restruction, i.e. destroying an academic unit by means of a restructruring exercise, where integrity and quality are replaced by the introduction of servility and terror covered up by bent and twisted and meaningless metrics)

he and his senior executive received very strong criticism by most academic staff and their collective representative. Simon Gaskell, Jeremy Kilburn (managers) reacted to waves of evidence-based arguments, written essays and personal representations with silence. Their straw-man in SBCS was making gross misrepresentations (for example telling the students that not a single person would be fired; telling the staff that he had no idea who might be affected, while asking administrators to inform him precisely on the latter question and preparing the new adverts for direct replacements of those being made redundant).

The silence of the managers (this word is in danger of eventually carrying with it a derogatory connotation should they continue unchecked) only broke after David Bignell’s Madness of Metrics and my follow-up letter in the Times Higher Education, from where I quote:

“Management remains silent and hopes silence will prevail. It would help if instead of posing new restrictions on internal email traffic while pushing through ill-considered plans, managers provided answers to those who are seeing their careers destroyed and to the students who won’t have teachers next year.”

Managers who have accepted hundreds of thousands of pounds to perform a restruction cannot utter a single argument in defense of their actions when confronted with anyone who understands what a University is for. This explains why the King’s College lot follow the example of their Queen Mary peers and hide away from the criticisms raised by those who actually have something to do with Higher Education and/or research and teaching. Yet, under the mounting pressure they felt obliged to reply. As no individual is willing to put their name to the restruction, the management group shamelessly use the College’s name to defend what they are doing. Let us take a carefull look at what they had to say: 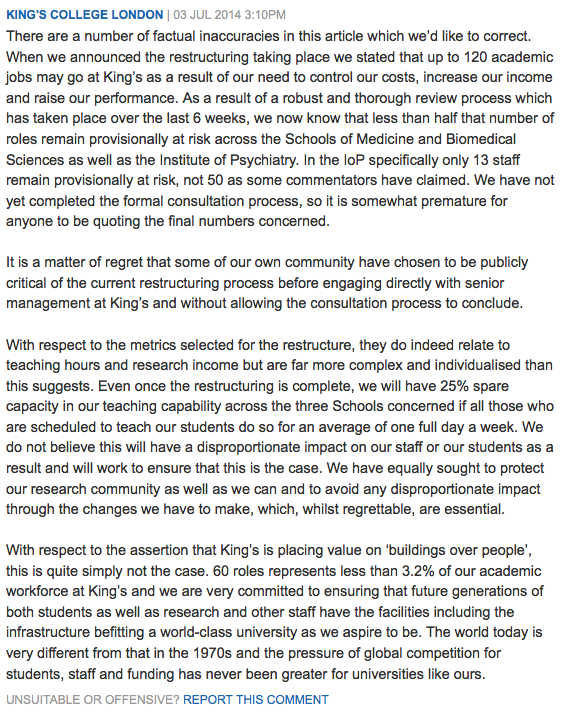 “When we announced the restructuring taking place we stated that up to 120 academic jobs may go at King’s as a result of our need to control our costs, increase our income and raise our performance.” The managers focus on costs, income and performance. Costs and income relate to finance not to education or research. But what is Performance? “With respect to the metrics selected for the restructure, they do indeed relate to teaching hours and research income”; in other words Performance also is understood as a financial matter by these managers who, having no understanding of Higher Education, ruin it. In doing so they pay a disservice to the whole of the United Kingdom. The UK academy is in very grave decline, and you can be sure that Rosalind Franklin, John Keats, Thomas Hodkin, James Maxwell and so many others would have found themselves on the firing line, as Peter Higgs said.

You probably recognise the above-mentioned names. I don’t predict today’s managers will be remembered, except perhaps for one-or-two that will manage to give the system its final blow (…their names and stories will be used as examples for why the word “manager” evolved away from its original meaning). I am coming to an end of this post, but not before I comment on the justification and methods used by King’s College managers as evidenced by their own words: “It is a matter of regret that some of our own community have chosen to be publicly critical of the current restructuring process…” and “The world today is very different from that in the 1970s…”

In today’s world, King’s College managers moke and provoke in press the collective representation of academics. This is a time for poetry, royalty, and decision making (boys and girls). Both the UK Parliament and active colleagues in research and teaching should pay more attention: a single warning to the fat cats and their excessive renumeration packages in a letter issued by ministers Vince Cable and David Willetts is obviously not enough to stop the feast. Colleges should not be arenas of class struggle, because science and letters require freedom of expression, resources to test new ideas and concentration to attend to a learning environment rather than to profitable financial transactions. Who can deliver?